Or you can reach us at

Now you can find out everything about our services on our Website. 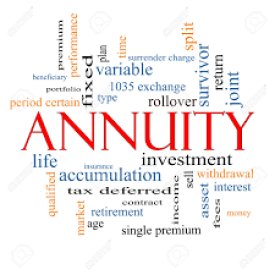 Annuity Overview: What is an Annuity?

Annuities are growing more popular as people have fewer resources available to them in retirement. As they see pensions disappear and Social Security wobble into the future, more Americans are looking to assets they can own and control, such as annuities.

What are Annuities, Anyway?

An annuity is a commitment from an insurance company to pay you a set dollar amount every year for a certain time period, usually the rest of your life. In exchange for this commitment, the client gives a sum of money to the insurance company.

Annuities have been around as long as the Romans. In America, the Presbyterian Church in Pennsylvania used them in 1720 to provide lifetime income for aging pastors. It’s easy to see where they fill a need. Until 1889, when Otto Von Bismarck invented the old age pension, there weren’t programs to pay people a predictable stream of income once they stopped working. Our own Social Security program didn’t start until Franklin D. Roosevelt signed it into law in 1935. Because the public sector didn’t make pensions available earlier, the private sector saw a need and filled the gap.

Annuities are issued by large insurance companies. The Romans, in addition to inventing annuities, are also credited with developing actuarial tables. When writing life insurance policies or annuities, insurance companies have little idea how long a certain person will live. But when you group thousands of people of the same age into a pool, the insurance company can make a pretty good estimate of life expectancy based on averages.

Bonds run for fixed periods. People buying an annuity expect income for their lifetime, sometimes for a fixed period. No one knows how long the person will live. Insurance companies usually pay a higher rate of interest than individual clients might find shopping for a bond themselves.

How are Annuities Taxed?

That depends when the client starts taking income. Annuities grow in a tax-deferred environment. The government doesn’t collect taxes until the client starts collecting cash in hand. The benefits don’t stop there. If the client begins collecting their lifetime income, the annuity payments represent a blend of earned interest and the client’s original principal. The government only collects taxes on the earned portion. When clients buy a corporate bond or a bank Certificate of Deposit the interest they earn is taxed that year. If the objective is growth that client takes three steps forward and one step backwards.

This description is based on a simple, straightforward annuity. Many variations can be written and sold by insurance agents. Think of this as buying a car and ordering options for your model. You can collect income for your lifetime with the provision if you die early your beneficiary can continue the stream of income for a certain number of years measured from the first payment. Many annuities are fixed annuities while growing. The interest rate doesn’t change during the rate guarantee period. Some annuities can be indexed – the return you earn is based on other factors. Fixed annuities buy their underlying investments with no input from you. Variable annuities allow the client to choose different funds within the annuity structure. This allows the client to have more control how the money might grow. Although annuities were originally invented as a way to provide retirement income, they can be used by clients seeking tax-deferred growth. The phase when money grows is called the accumulation phase. Once clients start collecting their scheduled income payments, they have entered into the distribution phase.

Annuities are designed to meet the needs of certain kinds of clients. Are you one of them? Contact one of our trusted advisors to see if annuities are right for you.

Top 5 Reasons to Own an Annuity

People can use many different strategies to finance retirement – each offering different strengths and weaknesses.

Annuities are an underrated choice with plenty of versatility. But the products can be complex and vulnerable to attacks by critics. But many respected financial professionals agree annuities should be a part of responsible retirement planning.

“If it’s used in its appropriate setting, which is a retirement income setting, it can be very powerful and very advantageous,” said Mark Warshawsky, a visiting scholar at the Mercatus Center of George Mason University.

Let’s examine the top five reasons to own an annuity:

An annuity is essentially reverse insurance. You buy life insurance to protect against dying early, and you buy an annuity to protect against dying late. Everyone knows someone, probably multiple someones, who lived 25 to 30 years or more in retirement. Try pondering the cost of living that long without a full-time job. It’s one of the biggest retirement fears in survey after survey: outliving your funds.

Annuities offer a lot of different strategies to buy guaranteed income. For example, a 65-year-old man can turn a chunk of money into five years of income while he delays accepting Social Security payments. Or a 50-year-old woman can pay for a deferred income stream she turns on at age 75 to protect against late-life expenses.

Markets go up and down, but annuities never change. Well, almost never. Many retirement investors recognize the value of safe money. In the aftermath of the 2008 market crash, fixed index annuity sales hit quarterly records in consumers’ flight to safety. The lure of tax-deferred income growth and safe, if smaller, returns with protection from losses, made fixed income annuities a market crash destination for investment funds. According to the Government Accountability Office, the New York Stock Exchange Composite Index declined by a total of 55 percent from November 2007 to February 2009.

Money invested in an annuity grows tax-deferred. When withdrawals are made, the amount contributed to the annuity is not taxed, but any earnings are taxed at your regular income tax rate. In addition, unlike other tax-deferred vehicles such as IRAs and 401(k)s, there is no annual contribution limit with an annuity.

Most financial advisors favor a diversified retirement portfolio. Not putting all your eggs in one basket, so to speak. An annuity, or multiple annuities as part of a laddered plan, takes care of safe income. But it also allows you to take a few more chances with the eggs that are invested in the stock market. The safe dollars provided by an annuity provide insurance of sorts while you pursue big gains in the market.

Annuities are most associated with retirement-age planning, as it fits best with the advantages offered by the product. But annuities can also help younger families achieve goals such as setting aside money for college as well.

The majority of individual annuity owners purchased their first annuity before age 65 (86 percent), including 47 percent who were between the ages of 50 and 64 years old, according to a 2013 Gallup poll. The median age of owners when they first purchased an annuity was 52, while the average age at first purchase was 51.

Younger purchasers tend to be people who have exhausted the maximum contributions to their 401(k) or other defined contribution retirement plans. They are candidates for an annuity to supplement their retirement savings.

Gallup conducts surveys for the Committee of Annuity Insurers. The most recent 2013 survey reached the following demographic findings:

Your form message has been successfully sent.

You have entered the following data:

Privacy Notice: By clicking the send button, you agree that we may contact you at the listed phone number to verify your interest in receiving quotes. Receiving quotes through our website is always free and you are under no obligation to purchase any goods or services as a result of this request. Your information will not be passed, and will be kept private. By using this form you agree to the terms of our private policy as so stated.